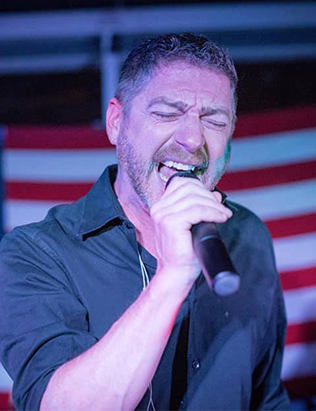 Jeff has been singing in bands since the 90's. Every thing from traditional rock and now rockin country. Jeff's country music influences include Johnny Cash, Alabama, John Denver, Hank Williams and Willie Nelson along with a ton of blues, classic rock acts, as well as R&B, and hip hop. Originally in a cover band with Bruce and Brian playing as BandCamp in 2000. He then joined the original band Superkid. Superkid received radio play on CT's 106.9 WCCC, 104.1 WMRQ, Mass's Lazer 99.3 WLZX &107.3 WAAF , NH's 101.3 WGIR, Maine's 102.9 WBLM, and NY's 89.5 WSOU. Jeff toured the northeast for a few years playing such famed CT venues as Toadsplace, The Webster Theatre, and others around the region such as NYC's famed CBGB's, The Continental, The Apollo Theatre, Bill's Bar in Boston, Geraldine's and FatCat's in Springfield Mass,The Worcester Palladium, The Saint in Asbury Park, The Chance in Poughkeepsie NY, the Arena in Philly, and so many more from Maine to Pennsylvania. Jeff is thrilled to be back with his brothers playing the kind of music that gets people moving and celebrates our longstanding friendships. When he's not playing with Shotdown, Jeff can often be found chillin with his family and friends somewhere sunny outside or sliding down a snowy mountain. Say hi to Jeff at the next gig and ask him if he brought all of his shoes.